Two days ago I learned of the death of one of my first clients as a substance abuse counselor at an all-male halfway house.  As is often the case I hear about these deaths from a former resident and their biggest concern is how I will receive the news.  My husband has gotten too used to me getting a phone call or reading messages on my phone and having me crumble into a mass of sobs.   He will gently ask me, “Who?” and on this past Tuesday night, just as we were molding our bodies into our respective tv watching positions, I answered with the name of someone he knew I cared deeply about and one of a handful of guys that he and my daughter had actually met.

“T” was an exceptional young man.  When I first met him I was stunned to learn that he was almost 30.  He could easily pass for 19.  He had the words “Sick Boy” tattooed on the nape of his neck, the name of a character from the book and movie “Trainspotting,” and when I, a 50-yr old woman told him that it was one of my favorite movies, he instantly adored me.  He smiled his broad and welcoming smile, and I immediately saw the incandescent light that had to have been trademarked as his somewhere along the line.

“T” was open and out as a gay man among a house filled with brawny and toughened guys and he was adored by every single one.  Some of the guys let him color their hair pink and green, file their nails, and rub their shoulders.  He was the “pet” without EVER being condescended to.  He was the one who got up early to write famous and inspirational quotes on the white board in the kitchen, every single day for six months.  One day he picked flowers for me straight from Boston’s Public Garden which I had to tell him he could have been arrested for.  After that, every time he went home on the weekend he would snip a flower or two from his mother’s garden like he did below: 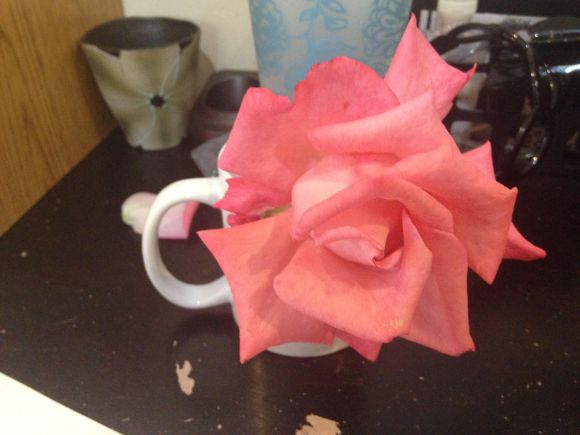 When he met my then 14-yr old daughter for the first and only time, he had a flower ready for her too.  When I told her he had died, she hugged me longer and harder than she ever has.

I spoke at the AA meeting where he received his one-year chip.  He beamed at me, and I at him, assuming that he had reached the end of his struggle with addiction.  He was ten months into a job that he loved and where he was adored, like he was everywhere.  When I learned four months ago that he had relapsed and essentially lost everything he had worked so hard for, I was devastated for him.  I reached out to him and got a text back that said, “Hi my love, things are pretty rough these days.  I just don’t know what to do.”  I answered back that he DID know what to do, that he had done it so triumphantly before, and that was the last I heard from him.

Every single Facebook post that started to unfurl on his page as people learned of his death uses the word “light.”  It is a somewhat overused descriptor, but with “T” it’s really the one word that can sum up his beautiful soul perfectly.

It makes sense for me to cite a Smiths song here, since “T” was a huge fan of the melancholy and angst in music.    In this case Morrissey got it all wrong when he writes “There’s A Light That Never Goes Out.”  “T” took his light with him and those that remember it, and him, will try so desperately to hold on to it, to bask in it, for as long as we possibly can.