Yesterday at the men’s sober living program where I am a case manager, I witnessed the implosion of one of our residents.  To me, he was always the most intriguing and one who I knew the least.  He wasn’t on my caseload but I had read his file and learned about his ongoing struggles.  He is very tall, very handsome, very articulate, is (was) a lawyer.  He is also an alcoholic, one of the few in the program who isn’t a heroin addict.  When I would do rounds, part of the job to essentially make sure none of they guys has overdosed in their beds, I noticed that he was reading Philip Roth’s “American Pastoral,” a book that has been on my list for years.

The men in the program are required to find a job after 45 days of their admittance and he had taken a job at a Jiffy Lube, a far cry from practicing law.  Most of the men are just happy to actually FIND a job and are humbled, not necessarily bitter about their new reality.  On days off, they can do whatever they want–go to the beach, movies, whatever, as long as they’re back in the house at a certain time.  There are random urine checks and the knowledge that our eagle-eyed staff, all in recovery except for me, can pick out a relapse from a mile away.

Yesterday, at around 4 in the afternoon, this resident was a bit wobbly going up the stairs to the house.  He apparently reeked of alcohol and was immediately given a breathalyzer.  His levels were off the charts.  He LOOKED so different, his face sort of doughy, his eyes red.  He came into the office that I share with my two coworkers and sunk to his knees.  We gave him the obvious space he needed to process how his life had just changed dramatically, knowing that he would be discharged from the program immediately.  For the other guys in the house, seeing someone in that state could be a real trigger.

With his head in his hands he repeatedly shook his head, and asked to none of us in particular, “Why do I keep doing this?  What am I going to do NOW?” He had begun to sob.  It was excruciating and tragic for me to watch. His case manager, clean for 15 years from a raging heroin addiction, just let him ask the questions.  He suggested that he immediately go to a detox, which had become a never-ending cycle for him.  The resident chose not to do that, asked for his savings that all residents are required to pay, and said that it was inevitable that he would buy more vodka, and check into a downtown hostel for the night.  He’d make the bigger decisions the next day.  His case manager tried to talk him out of that, but there’s nothing we can do.  He couldn’t stay and as painful as it was for him, my coworker handed over his money.

After he was allowed to take a shower he came back down to the office and asked for another chance, fully knowing that that couldn’t happen.  He shook my hand last, a strong powerful shake, and said “I’m sorry you have to see me like this.”

I pray that he has made it through the night.  I pray that his helplessness hasn’t lead to something even more tragic.  I pray that he can eventually end this cycle of pain and walk past a liquor store like it was just another Subway or dry cleaners. This will not be the last time I witness this.  I know that the odds of most of these guys making it through this six month program are pretty low.  I look at my caseload and try to guess who will be next, who might be seen by another guy in a heroin haze.  I hope that I will never become inured to the horrors of addiction, that I will always pray for each and every one to stay clean who will never have to ask again, “WHY DO I KEEP DOING THIS?” 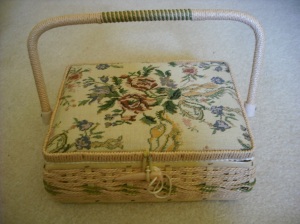 I just left my 14- year old daughter at the same camp that I went to for two months for fifteen summers of my life.   It’s her first time, only a 2-week stint, but the thought of her walking the same grounds that I walked, sleeping in the same bunk that I did, smelling the same smells unique to that special place, is filling me with a special kind of joy.  The camp posts pictures on their website every day and I obsessively scan them, and when I spot her, I try to analyze her smile to see if it’s genuine joy or just forced fun.  I went through the pictures with my ex-husband over the phone and asked him if he thought they were real smiles.  It didn’t help that he couldn’t tell either.  (Since this post was written just yesterday, two day’s worth of pictures have been posted and no fake smiles, only joy.) It’s only been three days but I can’t wait until noon when the pictures are posted from the day and night before.  Not being able to speak to her for five more days is leaving me slightly apoplectic.

Growing up, a critical piece of preparing for camp, was watching my mother sew name “tapes” on each article of clothing, not just for me, but for my brother and sister as well.  When the time came for her to start doing this, before our massive trunks were whisked away by a somewhat elusive trucking company, the excitement would build.  Camp was just around the corner.

My mother’s sewing box was an utter disaster.  It did not look like this: 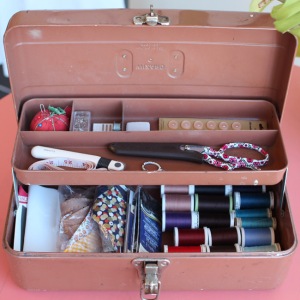 It was a black hole of chaos.  Buttons and bobbins, empty spools of thread, and those rubber things you put on your finger so you don’t, well, I’m not sure what they’re for.  When she would ask me to get something from there I would plunge my hand in, fully expecting that my forearm would emerge with needles and pins stuck in it like porcupine quills.  You took a big chance going in.

Tangled and floating and sunk to the bottom were our name tapes.  She would sift through, like panning for gold, until she found the right name to go with the right piece of clothing for each of the three of us.  She would ask me to thread a needle, something now, with my chunky fingers and failing eyesight, I would be hard-pressed to do.  (You’d have to hold a gun to my head to have me figure out how to sew a fallen-off button.)  I would give anything to be sitting next to her, watching as she performed this ritual, year after year, without ever complaining.

Camps still require that everything be labeled.  The advent of the Sharpie has made this much easier.  I began the process in earnest, finding whatever white space there was on inside labels and wrote my daughter’s initials in red.   When some new beach towels I had just bought had no place to write, I held them up and asked her to remember that they were hers.  I began to flounder and figured that she could figure out her underwear and socks (and bras and bathing suits. ) I made a special trip to the store to buy a roll of masking tape to label her toiletries, blow dryer, flatiron and brush.  Just watching me was getting her excited, just like I did when watching my mother do this for me. I picture her, like me for so many summers, sitting on the floor with her bunkmates as a counselor sorts through the clean laundry, finds the names and tosses it to the rightful owner.

Things are very different now for the parents of campers.  We have to fill out reams of paperwork to make sure we can’t sue if our kids trip and crack their heads open, doctor’s have to sign-off that it’s safe to dole out aspirin and calamine lotion. In my day, the nurse would hand out Sudafed and penicillin like it was candy.  I’m sure that if my parents sent me off with a bag of crack no one would ever know.   If a camper shows up at camp with lice or a fever, they have to turn them away.  I’m pretty sure that that would be the reason my parents would bring me there, and leave, dash to the car, and leave screeching, the car kicking up the gravel from the parking lot as they left.  One of my oldest camp friends just reminded me that she caused a massive outbreak of chicken pox rendering her the Ground Zero.  But certain rituals remain sacred, like watching your mother preparing to let go of you for a few weeks or a couple of months, to gain independence and gather memories for a lifetime.