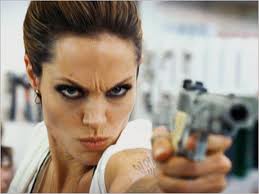 Not many people can lay claim to being kicked-out of pre-school like I can.  I remember the day well, sticking my hand up one of those machines that dispense milk, the ones with the plastic udders snipped at the ends.  My mother was called and told not to bring me back.  Ever.
A year later I pushed a neighbor into a thorn bush and tied him up with kite string.  According to facebook he is now the manager of a multi-million dollar hedge fund, clearly revenge for what a 7-yr old girl did to make him look like a pussy at the bus stop 40 years ago.
During my years of working in non-profits I spent a lot of time with “at-risk” individuals of all ages.  I worked on behalf of homeless women and former gang members, but I never expected that I would find myself working with incarcerated convicts.
For the first few weeks as a volunteer creative writing instructor with female inmates I had handouts, made them write and read from a book that I thought they could relate to. I was so not badass. Some were receptive, others just thought I was wasting their time.  Soon, I ditched the handouts, the readings and a pen hasn’t been used in my workshop in at least a year.  Now it’s very free-form  and those who start out staring out the window and roll their eyes, eventually become engaged in the conversation.  I have NO problem yelling at them to “STOP TALKING!” which gets the attention of the officer looking down on the class.  If they act up they know they can go to “the hole,” so generally once is enough.
I’ve recently started working with male offenders ranging from 14 to over 60.  The nature of their crimes are all different and what I instruct them in depends on what type of pre-release situation they are in.  When people ask me what I do I feel totally badass.  Usually people ask if I’m afraid or they ask my husband if he gets worried.  He’s used to it by now, and no, I’ve never been afraid.
People have become really used to the natural high or the incredible heartbreak I feel every week after spending an hour with “my ladies.”  It runs a close second to being on top of my Tempurpedic mattress as my happy place.  Now, after I finish my weekly classes with the men, I’ll call my husband and say things like, “I love my felons,” or “I love my juvenile delinquents!”  It’s that same feeling I’ve gotten from working with their female counterparts for the past two years.
People always told me that working with the men is much easier than working with the women.  The men certainly respect me a bit more, sit rapt with attention and call me “teach.”  Some are a bit more impenetrable than the women and there is one in particular that I am desperate to break through to just to see a teeny glimmer of vulnerability that I KNOW has to be in there somewhere.  The men tease me a bit and have their inside jokes that I am not privy to (the women always teach me new jargon) but I feel more attuned to the women, the playing field being more level.
The Urban Dictionary defines “badass” as “An ultra-cool motherfucker.” My 11-yr old daughter would take issue with that as she’s at that age where everything I do embarrasses her.  I bet, though,  when I’m not around and someone asks what her mother is like, she would totally describe me as “an ultra-cool motherfucker,” and nothing could make me more proud.