I’m standing, leaning against a railing, slightly raised from the dance floor watching my two friends dancing to Siouxsie and the Banshees’, “Kiss Them For Me.” One’s just moving her shoulders ever so slightly, the other, her arms outstretched above her head looks like a slithering snake in slo-mo. There’s almost a homoerotic quality to them, the subtlety and pure sexuality they are exuding. I have never looked that cool in my life.

My movements have always been LARGE. I speak large, I sing large and I tend to take up a lot of space when I dance. There is nothing subtle about me. I’ve always been more Katrina and the Waves, “Walking On Sunshine” than Siouxsie Sioux.

I was always on the cusp of cool, more B+ than A-list. At camp, school, college and after, there was always something that I was left out of, some after-hour activity that I was never asked to join. At camp, there were the raids and the midnight eating of contraband food that the counselors would sneak back from town. In high school, a pretty WASPY boarding school in the Berkshires at which I was part of only a handful of Jewish students, I walked around in a huge, puffy, PURPLE ankle-length coat like a dancing California Raisin.

Post-college friends of mine would stay at the bar or a party and dance on tables while I was sure to be home and in bed by 11. They’d leave with guys they had just met and wakeup, hungover and awkward.

The truth is, and people tend to be surprised to discover this about me, is that I have never been the party girl that I somehow appear to be. At camp I used to cry because my bunkmates wouldn’t shut up when I was trying to go to sleep. I’ve never bar-hopped or pulled an all-nighter. I’ve never taken hallucinogenics or thrown up from drinking. It wasn’t until my early 40s that I did my first tequila shot, but now, during the week, I have no problem getting into bed by 9:30. At this age, there is no reason to wonder about what I might miss when I duck out for the day. Back then, I’d be in bed regretting my decision not to live a little bit more.

I certainly knew in which contexts that people didn’t know quite what to make of me. I missed the mark on fashion and I didn’t have that certain posture, that way of holding myself that says “I don’t give a shit what you think of me.” I think there were some friends who were embarrassed a little bit by me, and sensing that, I would try to be quiet and just go with it. Now, I couldn’t care less about what people think of me and know it instantly. I essentially let the person I feel it from know by throwing that vibe right back at them with a stare that says “I’m on to you.” At this age, “cool” doesn’t matter. People generally tend to like me and if I’m wearing jeans that are bordering on mom jeans, I just cover them up with a long, last-season tunic.

Two nights ago a miracle in the form of an attractive 70-yr-old woman appeared, like Glinda the Good Witch in her ephemeral bubble, waving her magic wand. POOF! Leftover food from her Yom Kippur breakfast appeared on the empty kitchen countertop at my friend’s house. Bags of bagels and tubs of whitefish salad, piles of lox and pans of kugel materialized like the poppy field that Dorothy and her nice friends get high and fall asleep in. In my delight, I suddenly found myself clapping my hands like a seal.

Where I live there is no easy access to food like this. Twice a year Whole Foods trots out buckets of chopped liver and brisket and I stand in front of the case wide-eyed, like a kid watching someone put a final squirt of whipped cream on a sundae. The Whole Foods employees look rather horrified as they are faced with the task of spooning the chopped liver into takeout containers, undoubtedly thinking, “This is not in my job description.” I want them to believe me when I tell them that it’s better than ice cream, but clearly they don’t believe me. And, when people ask if it’s like pate, I don’t betray the integrity of what it is—chicken liver, chicken fat, onions and egg. Just like people call Target, “Tar-jay,” I don’t buy into this notion of “let’s make it sound fancy” because it’s NOT. It looks like cat food, it’s got tons of cholesterol, it smells, BUT, it is the most delicious thing you’ve ever tasted.

It’s not an original subject, talking about a Jewish cultural connection to food. Every race and religion has one. My Puerto Rican husband will go to the ends of the earth for the perfect paella. An Asian co-worker of mine taught me to cook with bok choy and talked about the culinary wisdom her Thai father continues to pass on to her. We all love to gather around and eat food that is familiar to us with those that we have done it with before. My husband is not going to pick up the last remaining hunk of gefilte fish with his fingers like my brother would. New friends are not going to hang around in the kitchen and peel the skin off of a roasted chicken and shove it in their mouth like my sister would. At my former (Catholic) sister-in-law’s house, I would get a hand slap if I pinched a glob of stuffing, and be forced to eat the green jello mold that was a family tradition (no so bad, actually). 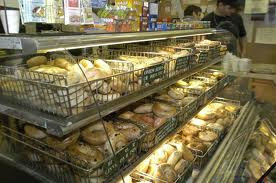 I will always give my father credit for creating one of the lovliest rituals of my childhood. Like Jews all over the the tri-state area, my father would get up early and hunt and gather. He would go to the not very originally named “Hot Bagels and Bialeys” which flashed in neon on a storefront, stand in line, and tell the guy behind the counter what to include in the baker’s dozen. They were picked from bins like the ones above, WAY before there were blueberry and chocolate chip bagels. The poppy seeds from the poppy seed bagels and the salt from the salt bagels would get mixed up with the onions from the onion bagels, so by the time he got home, the bottom of the paper bag looked like a dumped spice rack. We’d come back to them after eating, wetting our fingers and rolling them in the mixture, licking them off our fingers.

He would also go to what is called an “appetizer store” and get cream cheese and chives, whitefish rolled in wax paper, lox, muenster cheese and sometimes herring in cream sauce. With the resulting breath it’s no wonder we spent our Sundays in separate rooms.

When the question comes up, “What would you want your last meal to be?”, you know, which happens a lot, I would go for everything in both of these pictures. In honor of my mother, I might ask for a pot of boiled beef flanken which looks like this:

I’d throw in some rice pudding, a linzer tart and I’d HAVE to have mint chocolate chip ice cream, which incidentally, was the only thing Timothy McVeigh, Oklahoma City bomber, asked to have as his last meal. He certainly wasn’t Jewish.

After a couple of years running through the vast sea of non-Jewish men, my friend Mark and I decided that 2010 would be “The Year of the Jewish Husband.” Our “dating” lives seemed to parallel each other. There was a period of time when we were both, um, “entertaining” black men, younger men, Latino men, and just plain old white guys (not “old” white guys, just your run-of-the-mill white guy.)

Both of us had quite a flurry of men after we had both ended long-term relationships, both with white Catholic guys. I was married for 7 years and Mark was with his lover for the same amount. 2010 seemed like the time to buckle down and find the man that our mothers always hoped we would.

In a previous post, “Heckling At The Matzo Ball With Cocoa Butter Mark,” I end with our very short-lived desire and effort to join JDate. I was in my sunroom lounging on a chaise, glass of wine nearby, laptop on my, well, lap, and Mark was undoubtedly at a Starbuck’s, complaining about noisy kids, with his laptop on a table. We said, “One, two, three, GO!” and logged on to the registration page simultaneously.

“What tribe do you belong to?”

“Well you’re kind of dark so just go with Sephardic.”

a) I keep kosher, of course. That way I get to have 2 sets of Crate and Barrel dishes!

b) I put bacon on everything.

“How many times have you been to Israel?”

a) HELLO, I was bar/bat mitvahed in Israel!

At this point, I knew I wasn’t the type of Jew they were looking for, and after a quick search of “Men seeking Men,” Mark decided that he wasn’t either.

We gave up and went on to talk about other more pressing things, like who got eliminated on Project Runway or the cute black bartender we both had a little crush on at our favorite dive bar. Onward and upward!

Around three or 4 months after this, Mark met someone that he seemed very excited about. Mark has the great ability to be cautious, to not get ahead of himself when it comes to relationships, but I could tell that he was hopeful about this one. His last name is Nunez. From then on, he has simply been know as “The Nunez.” He’s Dominican and a real throwback to 2009 when, for me at least, it was “The Year of the Dominican.”

Not long after, just as I was about to throw in the towel on match.com, I met my now remarkable husband, whose last name just happens to be Rodriguez. Yeah. Now, instead of “The Year of the Jewish Husband,” it has become “The Century of the Jewtino.” We have even invented a cocktail—a Jewtini which is a delightful combination of rum, Coco Libre and Manischewitz, which premiered at our Jewtino Passover. If we had a spokesman he would look something like Geraldo Rivera or Juan Epstein from “Welcome Back Kotter.”

We have both found true love in these incredible men. Everyone adores “The Nunez” and Ricardo Rodriguez. Mark and I have never been happier. He told this story at my wedding celebration and of course brought the house down (when he wasn’t tearing up as he is known to do). We have no regrets for closing out “The Year of the Jewish Husband.” We adore our spicy Latino men for everything they are and we love that we still bring out the “Jewish” in each other, throwing around the occasional Yiddish phrase while the men look on and grin.